Christmas is my busiest season. Between bells and decorating and making special things for special people - time is fleeting! I’m currently playing yarn chicken with a scarf. Will I have to go upstairs and find a matching skein of yarn? Probably… ok, yes. I did have to get another skein. The recipient will love this gem. Heck, I love this gem and I might have to make a few more for friends if they see this. I think I have enough yarn to make 3 more… so, if you want one, message me. 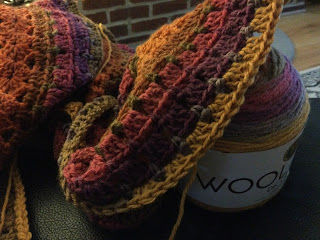 I finished this little lovely for a new friend who is getting married in a couple of weeks. I hope she likes it. 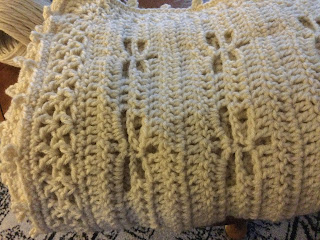 I’ve made some hand lotion. I’ve got ingredients for my homemade biscotti. I need to make a couple pair of mittens, and I’ll be done… for Christmas… maybe… But before any of that can happen, I need to finish the project at the top so I can mail it today, get through a rehearsal tonight, survive 3 handbell performances this weekend, and enjoy brunch and a tree trimming with my LLB.

I will get back to projects on Monday. That should leave me plenty of time to get it all done before Christmas… right??

Posted by Ladybug Crossing at 8:21 AM No comments:

That moment when you decide to make a blanket for a new friend who is getting married… and the gift giving is in less than two weeks… and you discover that you don’t have enough yarn - even though you suspected you didn’t… and it’s the day before Thanksgiving… and there’s no way you can wait to get the yarn, so you get up early to run to the store… so you can get back and spend the day crocheting in front of the fire instead of cleaning the house…

Yep… that’s it in a nutshell.

Posted by Ladybug Crossing at 8:37 AM No comments:

Around here we are thankful for all the blessings we have received. We are thankful for the home we have, the family we love, and all the good things that make up our life out here in the boonies. The list is long and when we contemplate that list, we smile.

Thanksgiving is a time to reflect on that, but around here Thanksgiving very quickly leads to Christmas… that means that things need to be done and in place for Thursday. This year dinner is easy - steak on the grill to be served with all kinds of yummy veggies. Dessert is to be provided by LLB - one of her famous lemon meringue pies and one oh so yummy chocolate mousse pie. Oh I cannot even wait! It’s a good thing she arrives Thursday because if she arrived with those pies on Wednesday, I’d eat every bit of them and she’d have to make more for Thursday. I have zero self control around pie - especially LLB’s pie.

Today I’m going to be moving things around and putting things in place for Christmas deployment after dinner on Thursday. At the moment, I’m typing here. No worries! I got this! I’ll run around like a chicken and get it all done. But first, I need to futz with the laundry, run the dishwasher, clean out the wood stove, dust, and vacuum… then I’ll get things moved around, out, and ready to go.

Remember - count your blessings - you’ll be amazed at how many there are.

Posted by Ladybug Crossing at 9:39 AM No comments:

Posted by Ladybug Crossing at 6:23 AM No comments:

I love fall because it means the return of fuzzy sweaters and fires in the wood stove. Mini loves the fire, too and spends most of her time curled up in the couch enjoying the warmth. 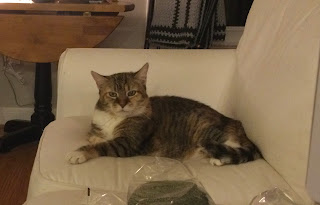 I’ve been crocheting like a crazy person. I’m currently working on a lovely green blanket-shawl while I enjoy the warm emanating from the wood stove. You can see the finished product from the thick gray yarn in the background behind Mini. That blanket is fantastic! 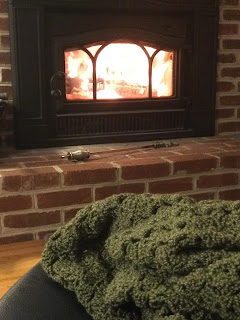 Posted by Ladybug Crossing at 8:05 PM No comments:

I got this wonderful thick yarn as a gift from a friend a while back. I debated what to do with it for months because the skeins are large, but don’t have measurements on them. 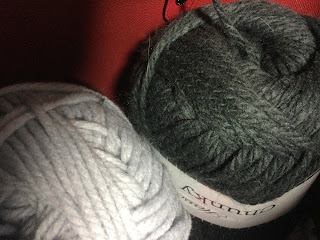 I decided to take a chance that I could make a blanket with the 3 skeins I have. So far so good. I am more than half way through the lighter 2 skeins. I think I  have enough to make a lapghan. I think that the recipient of this wonderful thick lapghan will get years of warm snuggles out of it! 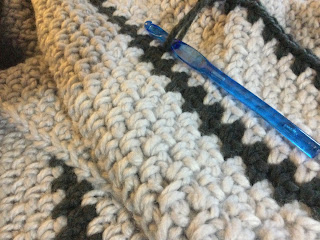 Posted by Ladybug Crossing at 8:50 AM No comments:

That moment when you finish writing up the very last minutes you’ll ever take for your HOA. Yep! Celebration time! I will not do that again - ever. It is a thankless job. The position is not appreciated - except by those who have done it. I was the secretary. My dear friend was the president. We served together for many years. We saw the neighborhood through a lot of crazy issues. We did the best we could. We gave hours and hours of time - willingly - for the benefit of the community.

Today all we heard were complaints. We suggested that those who were complaining the loudest get involved and serve. Yep - you guessed it - no dice.

Do you know that we got not one public thank you for the years of volunteer service we gave. We got a few lightly veiled (very public) nasty swipes from a couple of people who stayed on. Nothing like being tossed under the bus for something we didn’t do.  They revealed their true colors.

My dear friend and I are honorable people who try hard, put others first, and are good stewards. A couple of our neighbors came over and told us that we were appreciated, but for the most part I’m pretty disappointed. It will be a long time before we serve in any formal capacity. That said, we will keep on top of things, attend the meetings, and make sure they serve the community properly.

Posted by Ladybug Crossing at 9:08 PM No comments: