We are making progress. The benches arrived and I put them together tonight. I’ll put them out tomorrow and take better pix! 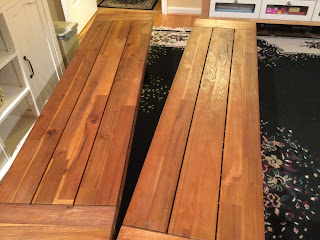 Posted by Ladybug Crossing at 10:10 PM No comments:

I found a welcome sign for the front porch. 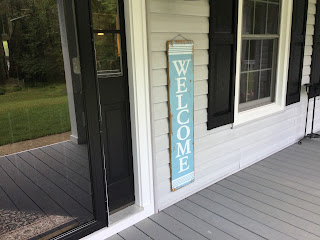 I love the blue and I remembered that my grandmother made some blue and white blankets. I dug around in a closet and found them. I put one on the swing. 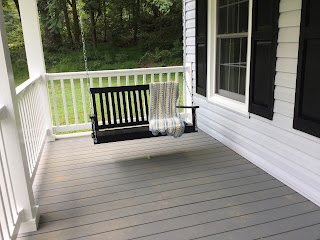 I’ll put the other on one of the new rockers we ordered. They should be here on Friday. I also ordered two benches. Those are due here tomorrow. Oh, and I ordered some mosquito netting curtains. We have the rods and I’ll hang those with command hooks to keep it simple. (If that doesn’t work, I’ll find a more permanent solution…)

I’m hoping to have everything here, put together, and in place by Saturday - we are having supper club that day. I have a very busy week ahead, but if I use my time wisely, I think I can get everything done. I’ll keep you posted…

Posted by Ladybug Crossing at 8:52 PM No comments:

The porch swing is up and adjusted! 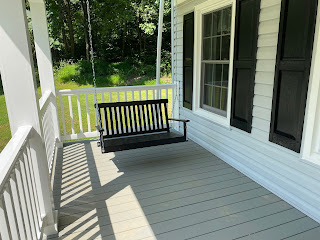 I’m looking forward to having LLB home this weekend to help me decorate the porch. It’s a matter of putting things out there and making it look homey.

Once it’s all pretty, we can do some serious porch sitting.

Posted by Ladybug Crossing at 2:40 PM No comments:

I Love My Painted Door!

They finished painting at about 7:30pm last night. We are pleased with the results. There are a couple of places that need touch-ups, but I can do that another day. If they had done the door first, I might not have needed to do the touch ups, but it is what it is! 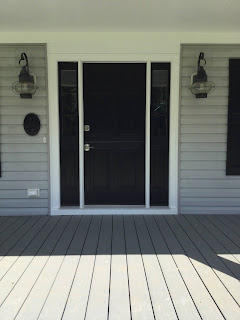 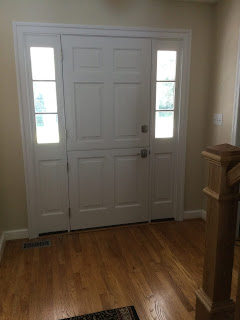 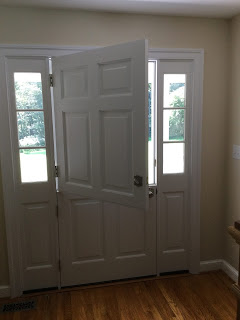 Posted by Ladybug Crossing at 12:04 PM No comments:

The porch ceiling is getting painted today, as is the new front door.

I’m very excited about this door. It’s a Dutch door! We had one in our old house and I loved it. Our contractor found me a Dutch door that looks like a real front door. It’s gorgeous! I cannot wait to see it finished! He put wide trim inside. It’s lovely! The outside trim is plain. It’s fine… once it’s all painted, I’ll decide if it needs more… 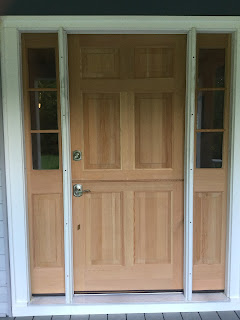 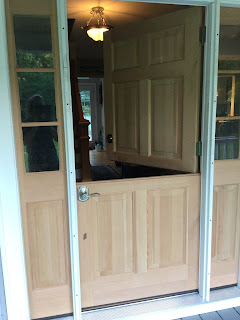 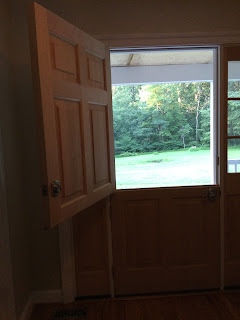 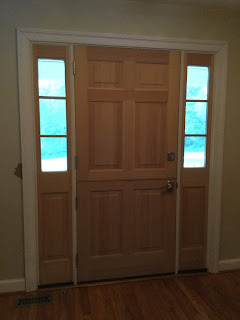 I pushed for ceiling trim and he will put that up.  Heck, I want it to look finished. Don’t cheap out on the good pretty stuff, right?

Posted by Ladybug Crossing at 4:58 AM No comments:

If a tree falls…

Does it count as a fall if it ends up like this? 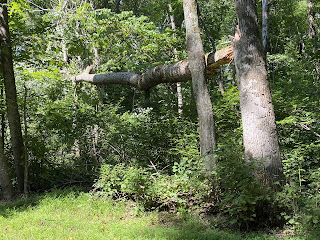 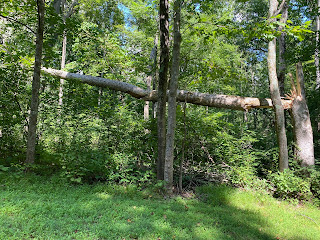 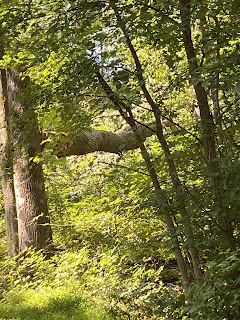 Yup… super scary and dangerous, but pretty cool, too!

Fortunately, it’s in the woods and not over the driveway. We will tackle this in the fall - with a professional.

Posted by Ladybug Crossing at 7:14 AM No comments:

Mr and I have joined the church vocal choir - affectionately known around here as the Tonsil Band. Tonight we had our first rehearsal in the sanctuary - with the organ. We had so much fun! It’s nice to be back in the church! Our Sunday service will be in the sanctuary - socially distanced, of course.

At the end of September, we will restart Handbell rehearsals. It’s time to get back to living, singing, and ringing! Our first handbell ringing in the service this fall will be Advent 2 at one church and Advent 3 at the other. I’ve chosen some really fun music - including a postlude that, if we can play it well, will be absolutely the best surprise for both churches!

It’s really nice to be getting back to it!

Posted by Ladybug Crossing at 9:25 PM No comments:

The Pitter Patter of Critter Feet

The other day I thought I was seeing things. I found two little black mouse turds IN my house. I do NOT do mouse anything in my house. I searched a bit and didn’t see anything else. I focused on Mini. She also doesn’t do mouse in the house. She was sniffing and looking in “different” places.

I had to run to church, so my cleaning and sticky trap placing was put on hold for an hour or so. Upon my arrival at home, I wanted to clean and place the last trap. Mr told me that the critter probably wasn’t going to go there because there’s no food, but there is a cat box in that room. I said, no… I think we have the trap, and I want to place it.

Not even 3 minutes after placing the trap we had our prey! I’ve left the other traps in place just in case there’s more than one critter pitter pattering around.

Posted by Ladybug Crossing at 9:04 PM No comments:

This came in my inbox this morning. Read. Understand.

This is 1938: First, They Came For The Unvaccinated

This is the most important commentary I've ever written.

Everything happening today to the American people ... to the U.S. Constitution ... to freedom ... and particularly to unvaccinated Americans reminds me of 1938. This is only the beginning. It gets much worse from here.

First, "the papers." Vaccine mandates and vaccine passports are just like 1938, when the Gestapo demanded papers from every German.

Now Democrats want American citizens, not illegal aliens, not criminals, but patriots born in this country, to produce papers 24/7. We'll need papers to enter restaurants, bars, nightclubs, concerts, casinos, conventions and hotels and to board a train, plane or bus. We'll need papers to enter a supermarket, or we'll starve to death. All for the crime of being unvaccinated against ... wait for it ...

All for the crime of being unwilling to inject an untested, rushed to production, experimental, "for emergency use only" shot into our bodies.

What happened to the war cry of Democrats: "My body, my choice"? It only applies to murdering babies, but it doesn't apply to dangerous experimental shots that we don't want injected into our bodies.

Weren't Jews injected with experimental drugs by the depraved Nazi government? Wasn't that a key part of the Nuremberg trials? That no government could ever again inject experimental shots into the bodies of unwilling citizens? Isn't that a basic human right?

By the way, this isn't about vaccines. If you want the vaccine, take it. I'd never stop you. I'd never limit your freedom, your choice. This is about vaccine mandates — forcibly injecting Americans who don't want it. That's 1938.

But there's much more in common with 1938. Mask mandates. If you're scared, wear them. I'm not scared. I don't want to wear them. Mandates are about forcing individuals to lose their freedom, choice, individuality and human rights. That's 1938.

Lockdowns are a match with the Warsaw Ghetto. Jews were locked down. Jews couldn't work. Jews couldn't travel. Jewish businesses were labeled "nonessential."

If government can force us to close our businesses, to kill our jobs, to decide who is nonessential, then this is 1938.

Stars on clothing. It's coming. The vaccinated get into restaurants, bars, concerts, supermarkets, planes and trains. They keep their jobs. The rest of us are marked as "subhuman" for life. That's the star. That's 1938.

Media and social media as the public-relations wing of the government. That's called propaganda. Remind you of 1938? Back then, the Jews' books were burned. Today, it's those of conservatives, patriots and specifically the unvaccinated. We are silenced. Our facts are labeled "misleading." Only the facts that agree with big government's agenda count. That's 1938.

Door-to-door intimidation and making lists of those who disagree with "government knows best." Trust me, that army of door-to-door vaccine brainwashers will soon be turned into a Gestapo of gun-grabbers. 1938 was the year Nazis banned Jews from owning guns. They took them door to door. That's 1938.

Only days ago, a former Department of Homeland Security official said the unvaccinated should be on the federal no-fly list. That's exactly how Nazis attacked the Jews and others who disagreed with their agenda. It was always lists. Lists of people to be disappeared in the middle of the night; lists of those to be sent to reeducation camps; lists of those to be sent to concentration camps; lists of enemies of the state. It's happening again. Maybe this time you'll only lose your job or free speech. This is, again, 1938.

It's all disgusting and disgraceful. But I'm warning you, this is just the start. It's all going downhill from here — fast. This is the end of America. This is 1938.

First, they came for the unvaccinated. Trust me: Next, they're coming for you

Posted by Ladybug Crossing at 7:56 AM No comments:

The VMI Moms Reunion was attended by just a few very dear women. We had a great time catching up. My decorations and food went over very well!

This is the drink table: 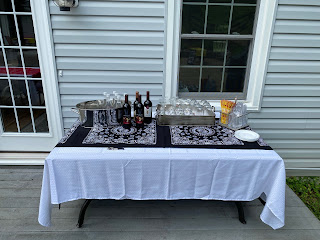 The photo booth that nobody used because we were too busy talking: 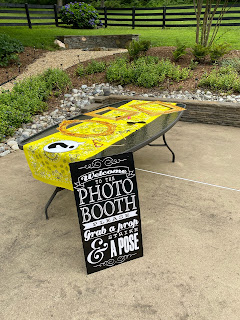 The table where we spent most of our time eating and chatting: 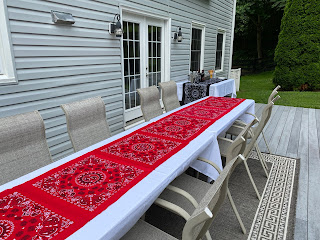 Mr after he finished a few last tweaks to the yard before everyone arrived: 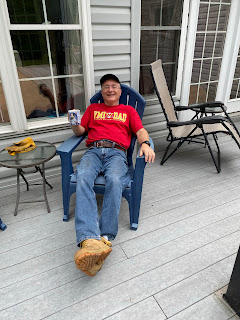 We will definitely do it again - maybe sometime this fall… or maybe next summer!

We had our Brava bell concerts this past weekend and I had such a great time! We played very well and our audiences were appreciative. LLB even made the drive to see her dear old mom ring bells. She was definitely impressed! Since she is the most gifted musician in the family, her thumbs up meant a lot! I’m looking forward to getting back to it after Labor Day.

Posted by Ladybug Crossing at 9:35 PM No comments: