It seems #1 got a new assignment. They are headed to Alabama! I’m headed there to help when needed - so a job would cramp my style! 🤣🤣

I’ve been busy working on this: 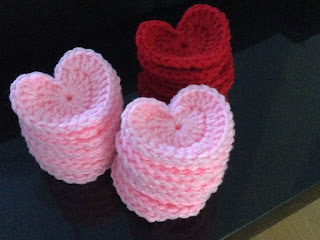 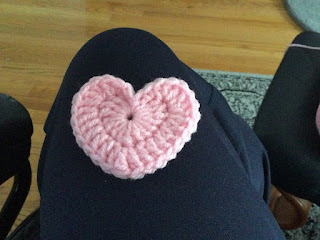 Those are for the church’s valentines cards.
So so cute!

Posted by Ladybug Crossing at 10:53 PM No comments:

So the other day I though I should probably go back to work… you know, to make some serious cash and get medical benefits so Mr could retire. Yeah… what was I thinking?

I got my resume together and wrote up a cover letter. I sent both off thru the Interwebs and figured the universe might smile upon me.

Fast forward. It snowed. It iced. I had a dentist appointment today and Mr needed to get to the office. We piled into my car - the one with 4 wheel drive - and set off. I despise Route 66. I despise fast, heavy, and big scary truck traffic. I got Mr to work, went to the dentist, did the shopping, and went back to get him. Note to self: unless a job is exceptionally well paying and worth my time, I will absolutely not be headed East on Route 66 on a daily basis. Ever.

So… now I need to figure out what I want to do when I grow up. I guess for now, I’ll enjoy my volunteer work and call it good enough.

Posted by Ladybug Crossing at 4:59 PM No comments:

I decided to make a temperature blanket this year. So far, so good. 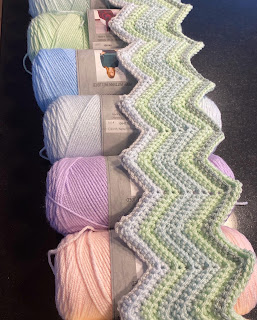 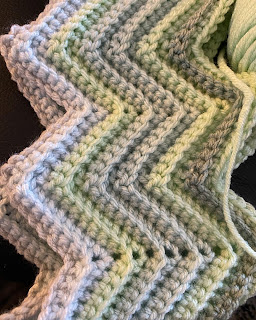 Posted by Ladybug Crossing at 4:35 PM No comments:

Mike Huckabee had this in his email this morning.

Scott Adams, best known as the creator of the DILBERT cartoon strip but also a bestselling author, trained hypnotist and professional prognosticator who predicted (like us!) Trump would win in 2016, made some interesting points about January 6 in his Thursday podcast (Episode 1615) of “Coffee With Scott Adams.” Worth quoting at length, so we will:

“...There were a ton of people there who didn’t even know they were breaking the law because the fences were down before they got there. They were just...protesting. So if you’ve got a President who is presuming without the benefit of a trial that these people were there for insurrection, you have put the assumption of guilt on citizens from the highest office in the land. The highest office in the land, the President, just put the assumption of guilt on a bunch of people --- some of ‘em were guilty, some, some. But most of them, not so much. Most of them were trying to do what they thought was preserving democracy, by postponing the certification until some audits could get done.

“Now, of course, when the fake news reports about it, they act like the idea was that they’d just take over and change the government. No demand like that ever happened. The only demand was, ‘Can you give us a few days to audit some suspicious stuff. That is PROTECTING the republic, at least in the minds of the people there.”

Also this: “We’re giving the states the presumption of innocence when they’re not giving us an auditable election. That’s backwards. The presumption has to be that the election is corrupt if you can’t audit it. That doesn’t mean it is...[but] the government has to prove they’re not guilty. They’ve gotta open the books.”

Last but certainly not least, this: “...You are in the middle of a massive brainwashing operation. I don’t know the degree to which it is organized, but it looks organized. It looks as if the whole January 6 thing is to keep Trump out of office and to keep Trump supporters and Republicans in general demonized by keeping that story in your head. Because it creates the situation where Democrats can do anything to Republicans, ‘cause dammit, those Republicans deserve it --- look at them and their insurrections!”

Posted by Ladybug Crossing at 11:41 AM No comments:

This was from a Daily Wire post. It was originally a tweet written by Allie Beth Stuckey that was supported by many including Candace Cameron Bure. She says it!

The idea that the biggest threat to democracy comes from the right is nothing more than projection. With all the institutional power in the world, leftism consistently seeks to limit free speech, religious liberty, the right to self-defense, medical freedom, & so much more.

Take a gander at the world right now and see where people’s rights to work, travel, and move freely are being trampled on. See where parental rights & the rights to free speech & worship are being constrained. Are these right-wing nations? No. They are “progressive.”

In a nation where a girl is praised for cutting off her breasts & calling herself a boy, & a man can become the “first woman” to do xyz because he now goes by Sally, but a person who won’t bake a cake for a gay wedding has his life ruined, our biggest problem ain’t conservatism.

We have been warned by intellectuals for decades that the Christian nationalist fascist state is imminent. Not only has it never come close to fruition, but we have become far more secular, & our views have become more liberal over the years, especially over the last 10.

And as the left, and the country in general, has moved further to the left, they’ve become extremely intolerant of others’ views. This study shows how overwhelmingly more tolerant of people’s opposing political opinions Republicans are than Democrats.

94% of a Republicans saying they’d be friends with someone who voted for the opposing candidate, vs 64% of Democrats, doesn’t exactly support the idea that Republicans are the ones intent on conforming others to their views.

Are there conservatives & professing Christians who want to implement a Christian theocracy? Sure, even though there is no Biblical directive to do so. But more likely is that Christians, just like secular progressives, think their value system is a good basis for society.

Every law speaks to a worldview. The question is, which one? Nothing is neutral. Christianity has offered a foundation for laws in the West that have, over time, accomplished more freedom & flourishing than any system in history. Secularism has a much more oppressive track record

So, if you’re scared for the future of democracy, look at those in power actually taking away people’s freedoms. If the only “freedom” you care about is the right to kill a child, and the limitation of that freedom is what you consider authoritarian, then evaluate your worldview.

Posted by Ladybug Crossing at 9:39 AM No comments:

Yesterday we had our first snow of the winter. It was heavy and wet and simply lovely - if you didn’t have to go out in it. 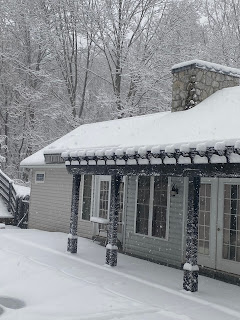 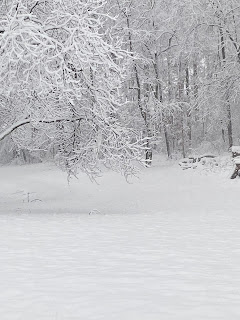 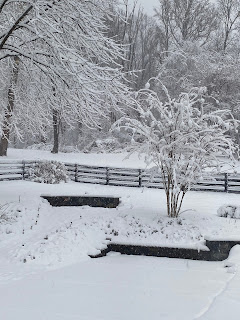 We also had our first snowblower catastrophe of the season - this time it’s a chunk of wood caught in the impeller. 🙄 We will let it dry and then attempt to whack it out of there…hopefully before the next snow that is due here on Friday. Note: it happened after the driveway was done! Woo!

We had a bell rehearsal last night in town for our community group because we have a concert this Saturday. It was so much fun to get back to it! Mr and I are singing as well. The soprano, who is simply wonderful, won’t be with us this coming weekend. 😳 That leaves me on my own… I did ok! The DOM at Emmanuel will be singing with us this weekend, so I feel much more confident. The bell group was very supportive and told me that I did really well… I guess I can sort of sing! Who knew?!

Posted by Ladybug Crossing at 9:15 AM No comments:

What did we do on New Year’s Eve Day? We cut, split, and stacked firewood… yes, we did! 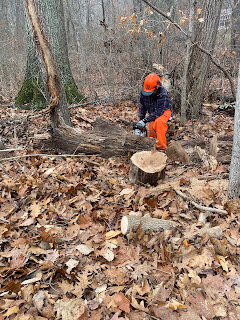 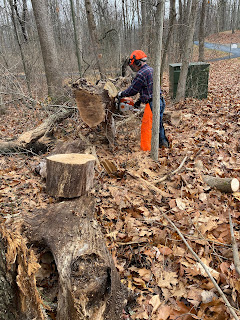 This tree was enormous! 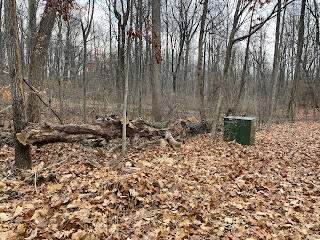 This is what we started with… 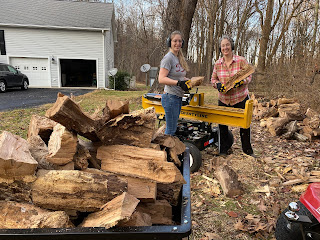 LLB and I split those logs

The panorama of Ladybug’s Lumberyard.
That’s a lot of logs for the wood stove!
Posted by Ladybug Crossing at 9:38 AM No comments: