That's the sound of time passing...
We've had some great things happen this week.
#1 was chosen to play Corny Collins in the high school's musical, Hairspray! He is thrilled and the part is absolutely perfect for him.
LLB is off to University of South Carolina for an Honor Band thing. She arrived there yesterday. She called and told me that she definitely did not make the top band as she had the most dreadful audition ever. Do we care? Heck, no! She is there to learn and have fun.  (I just heard from her and it turns out that she got 2nd chair in the next band! Yippeee!  She is very pleased!)
She texted me later and told me that she had the most delicious dinner at the Japanese Steak House. Of course she did!  We told her that Mr. wanted the leftovers. Her response was, "LOL! I brought the leftovers home to have later tonight." That child can eat... I will say no more.

I had an adventure yesterday. I was on my way home from helping the Lions Club with their eye and ear screening at the high school. I had called Gram and asked her if she wanted a wrap from McDo. She said yes. Our local McDo is at a gas station - sounds gross, but the food is great!
I pulled into the drive thru lane, which is clearly marked on the pavement. The drive thru lane skirts the perimeter of the gas pumps and keeps things safe and orderly for the most part.  I was behind another car. As it crept up toward the ordering location, I crept up.
I saw a car driven by an older gentleman out of the corner of my eye. He came off the road and straight through the pumps. (I find this utterly uncool and extremely unsafe.) He wanted to scootch in front of me. There was nobody behind me. I pretended I didn't see him. I was NOT letting him in front of me. It was late. I was hungry. AND, he did not follow the drive thru lane... he tried to cheat. So I ignored him. He beeped at me and then yelled at me. I told him I was sorry - even though I really wasn't. He yelled some more. He threw his car in reverse and then screeched around me.
As I pulled up to get my food, I saw the man ordering at the counter. Just think... if he had pulled in behind me, he would have gotten his food at the exact same time...  Karma...

I have crocheted 4 hats! I knew you'd all be impressed. I'll take some pix this weekend and put them up with all those Disney pix I've promised...
Enjoy your Friday!
Posted by Ladybug Crossing at 7:48 AM 1 comment:

I was asked to review a Lillymae Fanny Pack/Purse.
Check it out: 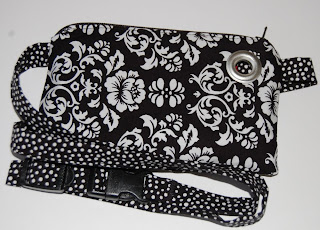 It's ADORABLE!  It's the perfect size for my iTouch and my phone as well as a few credit cards and some cash. It has two pockets inside, so I can stay organized and keep my things safe at the gym, at fundraisers, and any other place I don't want to carry my larger purse.  This little fanny pack/purse can be worn as a fanny pack or as a cross body purse. I wear it around my waist with the purse at my hip. It's most comfortable there for me.

Here is what they say:
The LillyMae bag was designed initially for women, although men love the basic black fanny pack. We all need to carry our phone and other basics, but with our active life-styles big bulky bags get in the way. When you are working out keep your phone or mp3 on you, and have headphone access through the side eyelet.  Have a young child with a cell phone for emergencies? Have them wear a LillyMae Bag, and keep the phone safe and on their person at all times. Our small strap size is perfect for a small person fanny pack.

Use a LillyMae Bag when you  are shopping, exercising, working, traveling, and every activity imaginable. The easily adjustable strap allows the easy transition between fanny pack wear or purse wear.
If you would like a Lillymae, I have a discount coupon code for you: 15001

You've gotta get one! I got the black and white one. There are many colors to choose from! Go, take a look and order one! You won't be disappointed.


This post was written for Family Review Network & LillyMaeBags who provided the complimentary product for review in exchange for my honest opinions
Posted by Ladybug Crossing at 9:08 AM 1 comment:

Today I was going to go back to bed and sleep.
Instead, I decided that I was out of time and I have to get all the tax information ready for the Taxman.
Since that job doesn't excited me one iota, I'm writing here... Okay, I'm procrastinating.

I'd best get my tax info collected and in a folder so I can drop it off on my way.
Now doesn't that sound like a really fun way to start the day?
No - I don't think so either.
Posted by Ladybug Crossing at 7:37 AM No comments:

Wow! I've not written in quite a while.
Did you miss me?

Let me catch you all up on my life...
We went to Disney World for Christmas - pictures to follow in a later post. It was a fun trip, albeit a cold trip. We saw Mickey and Minnie and all the other characters. The parades were amazing! The quality of the music and dancing was saw was simply phenomenal. The arts are alive and well in Disney World - it was refreshing.

I'm still fighting city hall trying to get our Performing Arts wing renovated. The school was built in 1963. The only wing not renovated at all since then is: You guessed it! The Performing Arts wing. This is a long and arduous fight, but it needs to be fought. The arts are important - just as important as sports, Math, English, and Science...  ahem.. I'll step away from the soap box.

We've been skiing.  A wonderful and blessedly injury free day was had by all!  Yippee!!

I've had strep.  The pills the doc prescribed taste terrible and I'm really glad I only have one left to take. When I take them, I just want to pull my tongue out and scrape the taste off... it's SO nasty!  I've also been dealing with a nasty cold on top of the strep. Some silly seventh grader breathed on me when I was subbing a couple of weeks ago. I don't appreciate him sharing almost as much as I don't appreciate his mother sending a sick kid to school...

LLB was accepted to and attended an Honor Band Clinic at Shepherd University in West Virginia. She loved it and wants to go back next year.
LLB was accepted to and will attend an Honor Band Clinic at University of South Carolina this spring. She was one of 4 students selected to attend and the only one who isn't a senior. Yes, she is excited and yes, we are very proud of her accomplishments.
She also has District Band coming up this week.  It's all trumpet all the time!

#1 will be receiving a scholarship or two from VMI. One for Chemistry and one for Band. Life is very good! We are hoping he gets enough to cover room and board. He is too, because it turns out he needs a new saxophone. Of course he does... We will be making a trip to Chuck Levin's in DC one of these days.
I've downloaded the list of the things #1 will need to take to VMI. It includes such things as 14 pair of black socks, 6 sets of white sheets - none fitted -- all flat, an alarm clock without a radio, 6 towels and six washcloths - must be white, 6 pair of black nylon knee highs to prevent blisters, 14 pair of WHITE underwear and at least 7 of them must be briefs (Talk about picky! They even control your undies!!)... the list goes on. I found it amusing - he found it "informative and overly exciting".
My favorite thing on the list was that electric razors, cell phones, radios, and iPods are not allowed until after break out - that would be late January or early February... Needless to say, I love structured places!

We've had a bunch of snow days here and I must tell you... I do love having the children at home. They make a mess. They hog the TV and the couch. They sleep until 10.  They can and do help shovel the driveway - which is a big plus since the snow blower died the other day! But honestly, I just love hanging with them.

They are back to school today and the house seems rather empty. Not that I'm not enjoying the quiet, mind you.  They have their last swim meet of the year tonight.  I've got my name tags made, my sharpie, my stapler, and my other things all ready to go.

Rest? Tomorrow... maybe.
Posted by Ladybug Crossing at 10:51 AM No comments: