Zeb forgets that his legs are short and that he is - in effect - a small dog.
In his mind, he is a grehound/doberman/shepherd cross...
In reality, he is a corgi - a small corgi.
Zeb is a pretty fast runner and an excellent herder.
In his mind he is faster Secretariat.
In reality, he's not that fast.
Zeb is not fast enough to catch a deer.
You think he would have figured that out by now...
Today he chased one across the yard and into the woods.
He returned 20 minutes later -- sans deer.
Maybe it's the chase he likes.
Maybe it's the exercise -- nah -- he is currently curled up, happily snoring in his crate.
He's probably dreaming about catching that deer.
Posted by Ladybug Crossing at 7:53 AM 4 comments:

I received the book, Little Star, by Anthony DeStefano to review.
It is a children's Christmas story. We collect Christmas books and put them out during the season for all to read. I find that my children - now high schoolers - still read the stories while they sit by the tree.


When Little Star arrived in the mail, you would have thought it was a new video game. They both got very excited about this new book for our collection.  They both read the story and LOVED it!  The story is sweet - it's about the littlest star in the sky and how he becomes Jesus' star.  This story will bring a tear to your eye - like all awesome stories. I'm not going to tell you why, because I want you all to go out and buy this sweet book.


The illustrations are phenomenal!  The kids told me that this book was an excellent addition to our collection.  They are picky about what goes in it - the stories have to be wonderful and the pictures have to be great. This book fits the bill!

This book is certain to become a Christmas classic. It already has in our house!

This post was written for Family Review Network & Little Star who provided the complimentary product for review in exchange for my honest opinions.
Posted by Ladybug Crossing at 9:19 AM 1 comment:

Deer are so graceful.
Even when they stand and watch you as you open the back door.
They are just amazing animals.
Zeb just chased one across the back 40.
She leaped, effortlessly, over a pile of brush...
It was awesome... it was beautiful...
I just wish the deer wouldn't eat all of my plants.

I just heard a gunshot.
Someone will have venison for dinner.
Posted by Ladybug Crossing at 5:53 AM 1 comment:

I went shopping with LLB yesterday. We were looking for bedding for my bed, tennies, and a few other goodies. We found some great things - no bedding - but I did get myself some new tennies. LLB got a couple of sweaters, some new black pants, and a new hat - very stylish and super cute.
The best part? We saved well over $100 between sale prices and a 30% off my entire purchase coupon!
That is the only way to shop!
Posted by Ladybug Crossing at 7:53 AM 2 comments:

If I hear that tired mantra - "Tax cuts for the rich" - one more time,I'm going to probably drop dead from "the big one". If you can't make a liberal understand tax cuts using this example, just walk away, and save yourself the grief.

Suppose that every day, ten men go out for beer and the bill for all ten comes to $100. If they paid their bill the way we pay our taxes, it would go something like this:

So, that's what they decided to do. The ten men drank in the bar everyday and seemed quite happy with the arrangement, until one day theowner threw them a curve ball.

"Since you are all such good customers," he said, "I'm going to reduce the cost of your daily beer by $20. Drinks for the ten now cost just $80."

The group still wanted to pay their bill the way we pay our taxes. So the first four men were unaffected. They would still drink for free, but what about the other six men, the paying customers? How could they divide the $20 windfall so that everyone would get his fair share?'

They realized that $20 divided by six is $3.33, but if they subtracted that from everybody's share, then the fifth man and the sixth man would each end up being paid to drink his beer.
So, the bar owner suggested that it would be fair to reduce each man's bill by roughly the same amount, and he proceeded to work out the amounts each should pay.

Each of the six was better off than before, and the first four continued to drink for free. But once outside the restaurant, the men began to compare their savings.

"Yeah, that's right!" exclaimed the fifth man. "I only saved a dollar, too!
It's unfair that he got ten times more than I did!"

"That's true!!" shouted the seventh man. "Why should he get $10 back when I got only two?
The wealthy get all the breaks !"

"Wait a minute," yelled the first four men in unison"
We didn't get anything at all. The system exploits the poor!"

The nine men surrounded the tenth and beat him up. The next night the tenth man didn't show up for drinks, so the nine sat down and had beers without him. But when it came time to pay the bill, they discovered something important: They didn't have enough money between all of them for even half of the bill !

And that, boys and girls, journalists, politicians both corrupt and straight (OK...not many straight, but it's for them all), moaners, gloom and doom merchants, political activists with their heads up their butts, and college professors - this is how the tax system works:

The people who pay the highest taxes get the most benefit from a tax reduction...It's simple, basic Math.

Tax them too much, attack them for being wealthy, and they just may not show up anymore. In fact, they might start drinking overseas where the atmosphere is somewhat friendlier - an event that would have a devastating impact on every other sector of the economy. 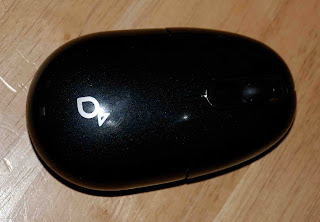 I got a new mouse to try and one to give away!
It's called the ErgoMotion Laser Mouse by Smartfish.
I was skeptical. I use my computer and my mouse all the time. I don't do change well, but I thought I'd give this little guy at try. I've had shoulder pain and all kinds of wrist issues over the years, so... if I could find a mouse that helped me alleviate some of that, it would be great!
The ErgoMotion Laser Mouse is a mouse on a pedestal. It's a little larger than the mouse that came with my mac.  It rocks on the pedestal. The pedestal and the rocking motion are what make this mouse so incredibly comfortable.  It's the little things...
I really like this mouse.  It's far more comfortable to use. It's raised up just enough so that my shoulder doesn't ache after I use it.  It doesn't weigh much and it absolutely glides across the mouse pad - that surprised me -- I don't know why, but it did.
The mouse is very comfortable in my hand. I like the roller wheel on top much better than the ball in my other mouse.  It's just the right size and is in just the right place.
The only thing I'm not used to is the right click button. This is because I have a Mac and my right click buttons are on the side of my old mouse. (And, I never use them...)
I love this mouse. I'll be using it exclusively from now on.
My Mac mouse is currently set aside on my desk - I think I'll use it as a paperweight.

You can win an ErgoMotion Laser Mouse by leaving me a comment by Saturday. I'll be pulling names out of a hat. The Mouse will come directly from the manufacturer.  Remember, if you don't win this mouse, you can always ask Santa to bring you one.

This post was written for Family Review Network & ErgoMotion Laser Mouse who provided the complimentary product for review & giveaway in exchange for my honest opinions.
Posted by Ladybug Crossing at 1:12 PM 3 comments:

I got a Spin and Go Mop to review.
I will tell you it was quite late in arriving, so my floors - which I'd waited to wash specifically for this mop - were filthy. As in disgustingly filthy. As in my husband was wondering if I'd lost my mind filthy.
I took the mop and bucket out of the box.  (I was so excited that I forgot to take pictures, so the picture from the Spin and Go website will have to do this time...)
The bucket has a "salad spinner" at one end that works when you press the lever with your foot.
The mop handle screws together and is very sturdy.
The mop head clicks into the handle with the press of your foot. You don't even have to touch it! I love that!
I filled the bucket with hot water. (I have hardwood floors, so I use very little soap if any.)
I dunked the microfiber mop head into the water and swished.
Then, I took it out of the water and put it into the basket. I pressed it down to the notches, held the handle gently, and pushed the foot pedal. I'll be darned if that thing didn't spin that mop head to the perfect wet/not too wet/not too dry consistency.  I'm very fussy about the wetness of my mop because all of my floors are hardwood.  Did you notice that my hands did not touch the mop head at all?? Yay!!
I drew the mop across the floor and saw - to my great relief - a clean streak!  Now, my floors were awful and I washed them twice because they were so awful.  I went through 4 buckets of water. That mop took every last little bit of grime off of my floors.  I did the kitchen, family room, and breakfast areas.  The whole thing took me 30 minutes tops.  The best part? I didn't have to touch the mop head at all. I could have washed the floor in my good clothes. I didn't get splashed. I didn't get wet. I didn't have wrinkly hands when I was finished.  You see, I usually wash my floors on my hands and knees. It usually takes me well over an hour to get done.  I did my floors twice and I did far more at one time than I normally do.  (I usually do the kitchen/breakfast nook one day and the rest another day.)
The spin and go mop is my new favorite! I LOVE it.
As a matter of fact, I'm going to wash my floors again, today!!  It's quick. It's easy. And best of all, it works! This is by far the best mop I've ever used!!


They say I can give one of these away.  You want one? Leave me a comment.

"This post was written for Family Review Network & Spin & Go who provided the complimentary product for review and giveaway in exchange for my honest review"
Posted by Ladybug Crossing at 8:12 AM 3 comments: