My VMI Mom Reunion party is quickly approaching. I am still cleaning and primping and preparing. I’ve swished toilets. I’ve washed floors. I’ve purged and scrubbed cabinets. I’ve wiped countertops. I’ve vacuumed and more. I just sat down to write and realized that the loveseat slipcovers need a good wash. Of course they do! I’ll tackle that on Thursday. Any sooner and Mini will cover them with hair before Saturday! Next on my list is to pretty up the napkins so they look nice on the table. I’ll let you know what I come up with.

I’m trying to figure out where to hang my lovely welcome banner… Mini is absolutely no help! She insists she is too busy to worry about my little issues! 🤣 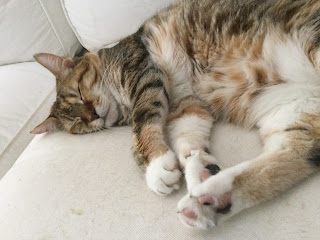 Really?! She claims she is busy checking her eyelids for leaks. We all know she’s napping… again!

Speaking of Mini. She has claimed a box as her own. Mr sprinkled it with catnip and it is now fondly known as Mini’s Opium Den. She used to sleep on the couch with Mr after dinner. Not so much anymore… now she is here: 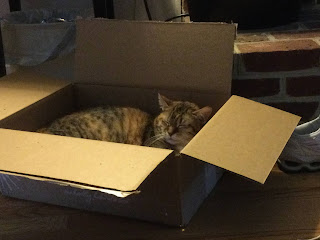 Posted by Ladybug Crossing at 2:38 PM No comments:

It’s been a few busy days since I posted last. The porch is coming along. The floor is down, the posts have been faced and trimmed, the blocking for the swing is in, and the roof is unacceptable. Oh the roof… it’s silver… I hate it! It’s coming off and a darker shade is going on. The builder agreed. It’s just way too light. 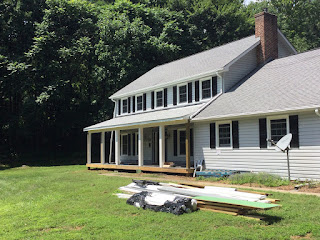 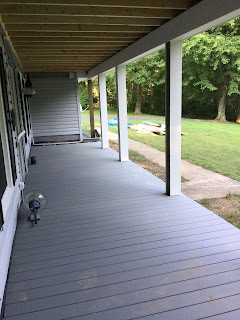 The pergola has been redone thanks to Jimmy Cunningham of Jimmy-Fix-It. The columns were replaced with posts, trimmed out, and the whole thing was painted black! I absolutely love it! 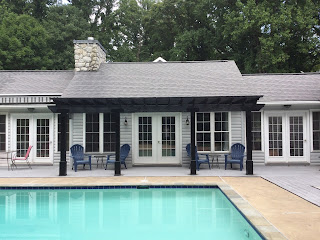 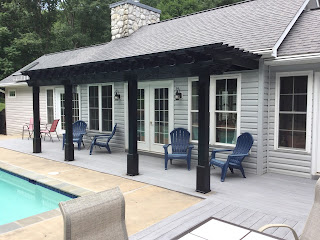 My VMI Mom Reunion started as a big get together, but has shrunk to about 10. A super easy and manageable number. I’m still a bit put out because so many said they’d come and then backed out. The old, “I’ll put it on my calendar” back in May seemed to be a farce. I mean, if you don’t want to come, just say so. But that’s fine! We will have fun, take lots of pix, and the rest of them will wish they came. We spent the day yesterday getting the house and yard ready. This house is big and the yard is big. Ooo we were tired! I’ll wash the bathroom floors today and give the toilets a last swish on Friday. I’ll put up my banner, decorate my tables, and get this place gussied up - later in the week depending on the forecast.

I rang my solo last week and it was great! No, I’m not signing up for another any time soon. You can see it here. I’m the prelude, so you don’t have to watch the whole service.

Posted by Ladybug Crossing at 7:03 AM No comments:

The porch is coming along!

Before - well, after they took out the landscaping and the tree: 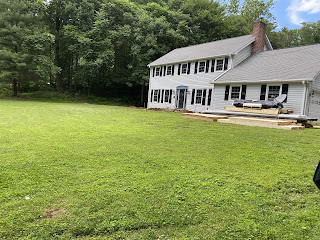 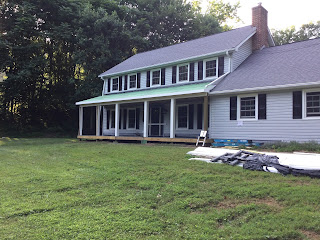 They hope to finish later this week! Squee!!

Posted by Ladybug Crossing at 9:13 PM No comments:

We celebrated with a trip out to dinner and a new grill! 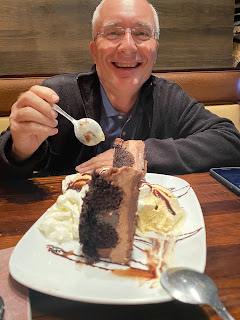 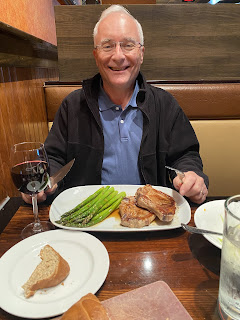 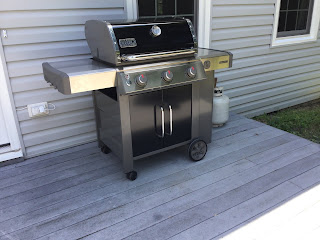 Posted by Ladybug Crossing at 9:01 PM No comments:

Our current situation is this: 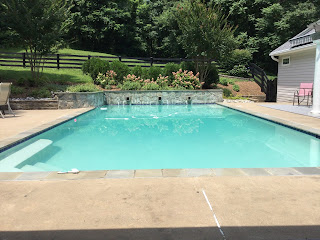 Yesterday we spent the morning in church and the afternoon doing chores as it was cloudy and blustery. We figured we’d work inside yesterday and take today as our holiday. We got to speak to both offspring - one as he was on his way to the gym and the other as she made her way home after dropping the Beau at the airport for his next duty assignment.  As the world heats up, these kids get busier and busier learning new things and new ways to protect the nation. We thank them and their families for their sacrifices and for their service. Freedom is a privilege - let’s never forget. Those brave patriots fought for our freedom long ago and then took the extra steps necessary to provide us with the Declaration of Independence and the Constitution.

Posted by Ladybug Crossing at 2:18 PM No comments:

What do we do when great people do bad things, hold bad beliefs, or support bad causes? (Cancel them?) Across America, communities are arguing over what to do with statues of and memorials to great figures in American history, whose actions or beliefs conflict with modern standards. In Virginia, one of the state’s premier colleges is struggling with how (or whether) to honor the legacy of one of the nation’s greatest military figures. The outcome of that struggle could influence how modern-day Americans eventually reckon with our country’s glorious-but-checkered past.

For more than one hundred years, a statue of General Thomas J. Jackson, known to the world as “Stonewall” Jackson, stood overlooking the grounds of the Main Post at the Virginia Military Institute, or VMI. Jackson taught at the school for the ten years before the Civil War broke out and he became a general in the Confederate Army. VMI graduate Moses Ezekiel, who fought as a cadet at the Battle of New Market, sculpted the statue. A Washington Post article from December 7th called the statue the "spiritual centerpiece" of the Institute.

No longer. In the wake of the George Floyd murder, Black Lives Matter protests, and an explosive Washington Post article alleging racism at VMI, the institute’s Board of Visitors voted to remove the statue. Completely. They didn’t relocate it to a less-prominent place on the campus. They sent it completely off post. Stonewall’s statue ended up seventy miles away, in New Market, at a VMI-run museum that commemorates the cadet corps’ fight there against Union troops in 1864.

If VMI needed to atone for past racism, banishing Stonewall Jackson’s statue was an odd way to do it – and especially odd for a military school. Stonewall Jackson was one of America’s most accomplished battlefield generals. In the spring of 1862, Jackson commanded a Confederate force defending Virginia’s Shenandoah Valley against three separate Federal commands. Stonewall led his troops from battle to battle, marching over 350 miles in one month. He defeated all three of those Union commands, whose combined strength was three times that of his force. Jackson’s campaign prevented Lincoln from reinforcing Union troops menacing Richmond, the Confederate capital. Jackson then eluded his pursuers in the Valley, joined up with Robert E. Lee, and assisted Lee in defeating the Union army outside Richmond, which saved the city.

In 2014 journalist S.C. Gwynne wrote Rebel Yell, a New York Times bestselling biography of Jackson. Its cover says Stonewall “engineered perhaps the greatest military campaign in American history,” and had become “one of the most famous men in the Western world.”

One year later, Jackson engineered another momentous victory. At Chancellorsville, he led his command around the flank of the Union Army, smashed and routed it. “Jackson’s strategic innovations shattered the conventional wisdom of how war was waged,” says the cover of Rebel Yell. “He was so far ahead of his time that his techniques would be studied generations in the future.”

That sounds like someone a military institute would want to commemorate, not banish.

But, was Jackson an evil racist? It was allegations of racism at VMI that prompted the removal of his statue. Was Stonewall Jackson a Virginia version of Simon Legree, the villain of Uncle Tom’s Cabin? Or Nathan Bedford Forrest, a founder of the Kü Klüx KLan? Hardly, according to Gwynne, a former bureau chief and editor at Time and a Pulitzer Prize finalist.

Jackson did own six slaves. Three of them came from his wife’s family. The other three, writes Gwynn, came to Jackson and asked him to buy them. One hoped Jackson would let him buy his freedom. Another was about to be sold to pay her master’s debts. The third was a child whose owner could no longer care for her. Jackson didn’t need these slaves; his purchases of them seem motivated mostly by charity. Gwynne’s biography shows no evidence that Jackson mistreated his slaves or was cruel to them.

In fact, given the times he lived in, Jackson’s treatment of African-Americans was uncommonly good, even exemplary. In 1855, the VMI professor started a Sunday school for Blacks. “Jackson believed strongly” in the endeavor, writes Gwynne. Jackson’s minister said he “threw himself into this work with all of his characteristic energy.” Jackson “soon had eighty to one hundred slaves in attendance,” writes Gwynne. “The school was entirely his creation: he conceived it, financed it, organized it, promoted it and recruited students” and faculty. Jackson led services and gave Bibles to top students. “From what evidence we have,” writes Gwynne, “Jackson was well-liked by blacks in town.”

Many 19th-century residents of Lexington, the hometown for VMI, weren’t happy to see Blacks in school. It was actually against the law in Virginia then to teach slaves to read! (Jackson apparently taught them anyway, so they could read the Bible). In 1858 three lawyers accosted Jackson. One called his Sunday school an “unlawful assembly” and another hinted at legal action.

Nowadays, someone in that kind of situation, fearful of cancel culture, might back down. Not Jackson. “Jackson, normally the most civil of men, responded angrily,” writes Gwynne. “Sir, if you were, as you should be, a Christian man, you would not think it or say so.” Jackson then strode off indignantly. The Sunday School stayed open. Jackson even paid to keep it operating during the Civil War.

That sounds like a citizen a university would want to honor, not diminish. Woke activists, however, are “litigating people in the past, using the moral framework of today," Ayaan Hirsi Ali told Congressman Dan Crenshaw on his podcast.

Stonewall Jackson had his shortcomings. He was an eccentric. (John Hay, Abraham Lincoln’s secretary, said Jackson reminded him of John Brown. Hay didn’t mean this as a compliment). He was an average teacher (at best), and he did follow his state out of the Union. The fact that he owned slaves and tolerated slavery does leave a stain on his legacy.

Nevertheless, Jackson’s strengths and accomplishments outweigh his flaws. He was one of America’s greatest generals, and he literally broke the law to help slaves. Who among us would risk harassment, even arrest, to do the right thing? Stonewall Jackson did.

It beggars belief that VMI (or the activists pressuring it) can’t (or won’t) devise a solution that acknowledges his shortcomings, but still honors a great general and a good person, on the campus of the school to which he dedicated much of his professional life. If, to be “inclusive” and “tolerant,” we must sandblast our past and sanitize our heritage, we risk becoming an emotionally and culturally brittle nation and a shallow people. Is this what “inclusion” has to look like? For all of us, across this country?

Good leaders lead by example, as Jackson did with his Sunday School. The Stonewall Jackson statue affair could have set a good example for others to follow, by showing how modern-day Americans can acknowledge the flaws of our heroes (and the times they lived in), but still commemorate their character and accomplishments. Unfortunately, VMI’s treatment of Jackson’s legacy looks less like commemoration, and more like cancel culture. It sets a bad precedent. Stonewall Jackson deserved better. As did we all.

Donald Smith was raised in Virginia. He graduated from the University of Virginia and the Joint Military Intelligence College. He is a defense contractor and retired Army Reservist."

Posted by Ladybug Crossing at 10:04 PM No comments: