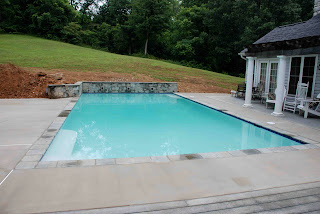 Today is the last day my #1 will be home and able to sleep in.  Today I will let him sleep because I am nice and because I know that every day for the next 25 days or so, he will be up early and in class. This little tidbit brings me great joy as this is payback for all of those years he was up at 6am without fail.

Later this morning Mr. will help chop the tree that fell at the church last night. He gets to use his chainsaw -- how manly!  #1 will finish packing his trunk. He has a few items that he needs to put in there like a fan, a bathing suit, and his running shoes. LLB hopes to spend the afternoon with HP playing video games and chatting it up. As for me, I hope to be sipping a mimosa and chomping popcorn with a dear friend while we watch the frogs hop around the puddle in the bottom of the pool. It's not exactly what we had envisioned -- sipping mimosas while floating around the pool on our noodles -- but it will do.

We head off to VMI tomorrow morning - bright and early.  Because we are good parents, we will haul his stuff in, help him find and purchase his required textbooks, have lunch, and wave goodbye.  He will have wanted us to leave as soon as we got his trunk up to his room!  We have a Parent Orientation which we are required to attend in the afternoon.  It will be a fun and informative day, I'm sure. :-)

On a separate note, the pool is due to be plastered tomorrow morning - beginning at 6:30. Let's hope that by the time we get home it is done and full of water.   I want to be dangling my feet in there tomorrow night.
Posted by Ladybug Crossing at 10:20 AM No comments:

Is still empty and gray.
They did not show up to plaster it on Friday as promised.
Alas, patience is a virtue.

Yesterday I packed my #1's trunk for his first stint at VMI.
Spacebags are my friend and his. It's amazing how much one can stuff into a spacebag when one can only bring one trunk... His clothes and his comforter have been vacuum packed. He even had room in there for his lamp, his clock, his pillow - which I could probably have put in a spacebag, too -- and I still might.  All that's left to put in there are his flip flops, his running shoes, and is external drive. :-)  How he gets it all in there to come home is his problem.

As I was packing, I realized that I need to purchase him 2 more sets of towels - he only has 4 sets and they require a minimum of 6.  This will require a C*stco run, but that's not a huge deal and I like C*stco.

We haul him and his trunk to VMI on Tuesday. He is excited. He is nervous. He will be just fine, I'm sure. This first stint is similar to summer camp with homework. He is taking English Composition. He can write. He will excel. While he is there, he will be issued his combat boots and a pair of socks - he was already told that he had to break them in. In my minds eye I picture him dressed in plaid shorts and combat boots - that's attractive -- hahaha!!! :-)
Posted by Ladybug Crossing at 9:45 AM 2 comments:

Hey! Check it out!

First thing yesterday, Grandpa was out in the yard snooping around. He found this and asked if he could keep it. Hah! I should think not. 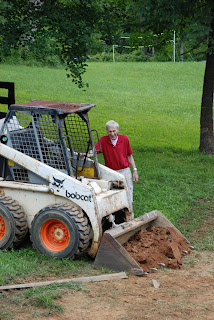 We went from this yesterday morning... 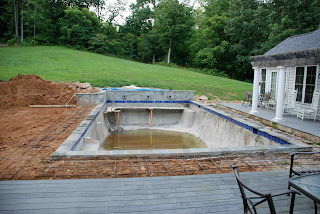 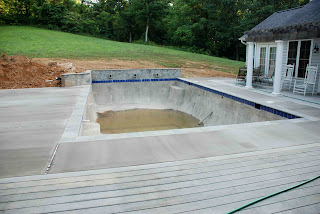 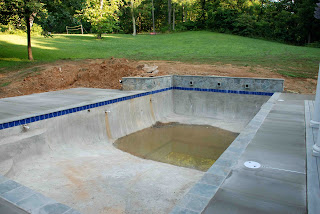 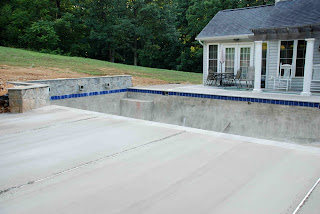 It makes the whole pool look larger and the pool area so much more beautiful.
We are very very pleased with the progress...
After speaking with the company's owner, it's thanks to his wife for pushing him to get this pool done. He and his family live across the street and are really terrific people.  It seems that she made him sit and watch all the kids, cars, and people pile in here for all the events we have had. He said she made him stay up for the cast party. She made him watch for the graduation party. She makes him stay and watch the kids come up for the Wednesday Sectional Rehearsals. I had no idea they even noticed. He said it gave him perspective - he saw it from the consumer's side of things. That alone is worth the parties we had without the pool. As long as something good comes out of it - besides my learning to be patient - it was all worth it.
Now -- if they don't show up to plaster and fill today, I'll be absolutely crushed. Patience is a virtue, but I still want the kids to swim on Monday!
Posted by Ladybug Crossing at 8:01 AM 1 comment: