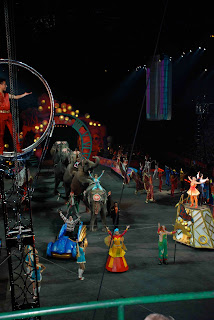 Was an absolute blast!!

We saw the Ringling Brothers and Barnum and Bailey's Zing Zang Zoom show.

I've told anyone and everyone that they NEED to see it before it leaves town. 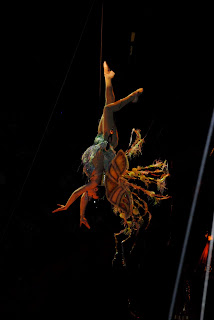 We saw elephants, clowns, acrobats, high wire acts, tigers, and more. The highlight of the show was when they shot people out of a canon. OMG! That was wicked cool!!!  Our seats were right where they landed. We were a little worried that they might end up in our laps, but they didn't! They landed exactly where they were supposed to.  The other thing we liked was the pendulum guys! We were right at eye level with them... it was awesome!

I love the live band - I think it makes the whole show so awesome!  The music is simply phenomenal!!


So - if you are looking for something fun to do - head to the circus. 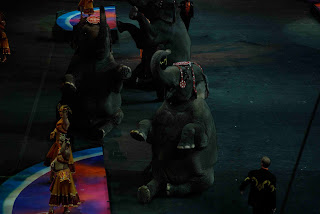 That said, I will tell you that there are some people who should simply stay home:
Those of you who want to have long involved conversations with the people in your party - the circus is not the place for you. The circus is loud and is not the place to have a lengthy conversation. You have to speak loudly to be heard over all the noise and the people around you can hear every word you say. Trust me, people in front of you don't care about that new web site, your mother in law's bunions, or what you had for dinner...
Those of you who have children that are afraid of loud noises or darker places - again, the circus might not be the best place for you.  The circus is dark and loud and noisy.  If your kid is a screamer, the people in front of you don't want to listen to your kid scream at the top of her lungs the entire show. They would like to enjoy the show without worrying about going deaf because of the high pitched whine in their ears.
Posted by Ladybug Crossing at 7:42 AM

On the other hand, if your little one doesn't like the dark, is afraid of the clowns and the animals, doesn't like noise and let's you know by screaming, and cowering in your lap maybe you should comfort your child or leave!

I am amazed that people would spend money to take their small terrified children to the circus and ignore their fears.
How sad!