So, did you all miss me yesterday??

I was off on a field trip with Little LadyBug. We went to a historical park south of Richmond called Pamplin Park . It is a gorgeous place where some of the battles took place. There is a really nice museum there, as well. If you need an educational stop on your vacation, I recommend this place.

We learned all about what it was like to be soldier during the Civil War. We learned about their clothing - man oh man am I glad we have something other than wool pants and jackets to wear during the hot summer months. They had one blanket - I can't live without my down comforter and fleece sheets!! They thought the battle would last two weeks... They were incorrect as we know from our history books!

We learned about the punishments doled out to soldiers who were naughty - gamblers, drinkers, and just plain lazy guys - they embarrased the heck out of them. They made them stand on a box with a sign around their necks holding a log across their shoulders for 12 hours a day for 3 days... They also made them sit on a log horse high in the air holding a stick sword. If they were really bad, they had to wear weights on their legs... for 12 hours a day for a week... Ouch!! I'm thinking that if you are a guy, that horse thing has got to hurt!

The kids got to re-enact the battles. They learned how to march, how to manipulate their guns (they got these cool wooden guns to use), and how to run up the battlefield and then drop down when the shooting began. They had to figure out where to fight from (behind a fence is the best place). They had to yell bang every time they shot their weapons. It was really fun!! I'm originally from New England, and up there they would never ever give a kid anything that even looked like a gun - I DO love the South!! 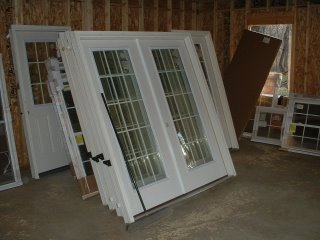 LadyBug
Posted by Ladybug Crossing at 7:02 AM

LOL...sometimes it is hard not to say anything. Sounds like you had a wonderful time at the park & love your new windows & doors.

I love those windows/doors! Very nice!

Those windows and doors are awesome. I can not wait to see what they look like when they are installed.

I never would have guessed! LOL! (about the windows & doors)... glad you had fun on little lady bugs field trip!

The windows and doors are beautiful.
It sounds like you guys had a cool time at the park. Thanks for sharing.
My WW is up.

really nice windows there! what a fund day you had! :)

Sounds very interesting! I was at Gettsyburg a few years ago and was in awe - got chills. Congrats on the windows and doors!

You should have lots more WW with those windows as they get installed! We can watch the changes happen! Thanks for sharing!

My WW is up now too!

This is just a little note to let you know my T13 is up.