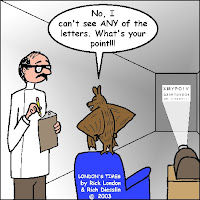 My LLB went for her annual eye checkup last week.  The doc said her eyes hadn't changed very much - just 1/4 step worse. This is really good news since just a few years ago she was stepping into the realm of the extremely nearsighted at a much faster pace.
We looked at frames, but decided to use the ones she has until next year when our VSP will cover new frames.  That was until they told us she'd have to leave her glasses at the shop so they could send them out to get the new lenses installed.  My first thought was, "You're kidding me, right?"and that's what popped out of my mouth. (I have trouble with that sometimes.) They assured me that they weren't kidding. I bit my tongue - hard. Obviously, the people who work in they optometrist's office, don't actually live their lives in the fuzzy world of diminished sight.
Even if LLB wasn't off the next day to USC for an Honor Band and there was NO WAY I could allow her to walk around for a week her without glasses!  She gets lost with them on - can you imagine what would happen if she didn't have them??
Fast forward to Saturday. We'd been trying to find out her vision number for a form for the USAF.  They wanted to know if her vision was worse than 20/50.  I knew it was because the kid can't see the big E on the top of the eye chart... But, what do I know?
Mr. called the optometrist to find out her number. 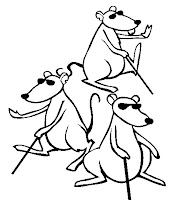 Let's just say if her vision were an SAT, she'd be all set!
So - this morning, we were chatting about her vision or lack thereof and she wanted to know her numbers. I told her.  Her response, "Wow! That explains a whole lot."
"Yes, yes it does, but it does not explain why your room is a disaster."
"Oh, but it does. Technically, I can't see the mess."
"Yeah... that's it."
Posted by Ladybug Crossing at 1:26 PM

I've never been allowed to use my daughter's old frames. Probably because the place we're getting the glasses from wants to sell us new frames, but they always give us some line about how the old frames will be too weak to hold up.
I believe that if you're going to go that route that what you do is to use the previous pair (ones before the current pair) of glasses until the new ones can be made.
Last time we got glasses I believe we got overcharged. We finally had insurance coverage but I believe that the place charged us more than what we paid without insurance before. Nice gig for them...not so nice for me. :P