What a busy weekend!

I was going to write about something completely different, yet related, but I'm not convinced that I'm still not being watched, stalked, talked about, and generally being spied upon.  Some of you are asking if I might be paranoid... Yeah... maybe a little. It's sad to think that I can't express my feelings on my own blog because people - and they know who they are - think they have the right to tell me what I can and can't write about.

I'll fill you in on the weekend instead.

As many of you know, LLB was off at USC for an Honor Band Clinic. She LOVED it! Her favorite part was having a master class with Allen Vezzutti. She learned a ton, had a great time, and arrived home at 3:15am this morning.

On Saturday, the rest of us went to VMI to see the boy and his girl.  We had a quick picnic lunch and then headed off to the basketball game. We got to sit with the band and it was awesome! Can I say that the band director is just as much of a kid as the college kids? He is a scream!  Heck, I want to be in his band. He is everything that the high school director isn't. And it just blows my mind every time I see him in action.  What a breath of fresh air! Anyway, it was a very close game and it was fun to be in the stands.  The band played a lot and I really wish that LLB had been there to see how much fun they all had. The best part? VMI actually won against William and Mary.

After the game, we unloaded the car of all the microwaveable mac and cheese and ramen noodles that one boy could eat in a week and most people could survive on for a month. I included in that care package a new ski jacket, a box of plastic spoons, a tiny bottle of dishwashing soap, a set of measuring cups and THE most awesome mug ever! 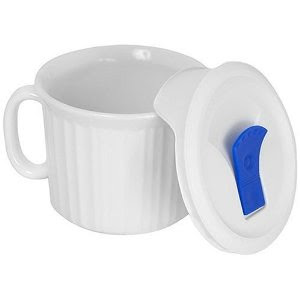 It's a 20oz Corning Ware microwaveable mug. FYI:  I found it at Walmart for less than half the price Amazon has it.  It's perfect for Easy Mac -- one packet of EM, 2/3c water, nuke it and you're done. He tried it out yesterday and even called to tell me how wonderful it is!  Mother of the Year!! Thankyouverymuch!!
Anyway, after that, we went to a great Italian sub place in Lexington. They had the best Italian sub I've had since we moved here.  I'm definitely going back and I'm going to try the Calzone and the Pizza and whatever else is on the menu. It was wonderful!
We had coffee hour at church yesterday. When we do coffee hour, we do it up because we figure we've had lunch on others for the past few months and it's only fair.  I must say that our coffee hour rocked!  If there's one thing our family does well, it's food. We had Mr's chili with rice on the side, spinach and strawberry salad, ravioli, shrimp salad mini sandwiches, mini crab sandwiches, crunchy snacks, and more. Everyone seemed to enjoy their lunch and hopefully everyone went home with a full belly.

From that point in the day, my life becomes very ordinary again with making up LLB's bed, a bit of vacuuming,  putting laundry away, doing the dishes, and generally sitting around until 2:15am when LLB called to tell me she was a half an hour out from the school and to meet her there.

Today, I've hauled in some firewood, had a cup of tea, and driven LLB to meet her friends so she can go Snow Tubing.  My kitchen counter is awash with Calculus and History text books, a calculator, a few notebooks, pencils, and the remnants of her lunch.  So as much as life is busy, life is ordinary... and that's how I like it.
Posted by Ladybug Crossing at 1:12 PM

did LLB make it to schoolt he next day>