The day started off with Solo and Ensemble at 8am. We got a little lost trying to find the school's driveway, but we managed.  The kids did their thing and we were out of there by 10:15.  We stopped to pick up the corsage.
Upon arrival at home, #1 finished up his homework - teacher decided Monday would be a great day to have a math test... Yeah... thanks.
After lunch #1 started on cleaning Mr.'s car. He vacuumed it. He washed the windows. He got the stains out of the rug. He made it smell nice. He washed the outside. That car has NEVER been cleaner!!
We headed out to go to #1's girl's dad's house. Mr. rode with #1 in that spit polished ride and was very impressed with #1's efforts!  I can only hope he details my car next.
We arrived at the house to take pictures. The whole family was there..
But it boils down to this:
She walked into the room and #1 was speechless - he's still talking about how pretty she looked. Her dress was beautiful. Her hair was amazing. She is such a pretty girl anyway - how could she not be simply stunning?


#1 was handsome in his tux and his date was simply lovely! 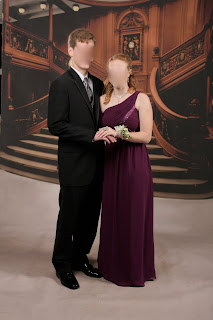 This is the professional picture that they got - I think it looks like they are on a cruise ship! Below is the picture I took in her dad's living room.  I blurred their faces just for you. 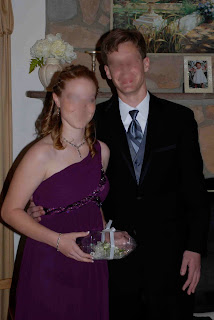 The After Prom Party was a blast for the kids! They had all kinds of food including a chocolate fountain and freshly made smoothies.  They had Avatar in the movie room (that's where I was assigned and it was definitely the place to be -- nice kids, great movie, no effort!).  They had black jack, craps, roulette, skee ball, as well as a bunch of different video games to play. They also had a couple of moon bounces that were a big hit with the kids!
The kids could win prizes including savings bonds and a senior could even a new car! It was a terrific night! It was a late night, but it was a really terrific way to keep the kids in and safe.
#1's girl's mom worked part of the Prom as well as the After Prom Party. She was impressed with how well behaved most of the kids were - especially ours! (Phew!) She was not impressed with how some of the kids were dancing -  some of the moves she saw were reminiscent of something you'd see strippers do with a pole... Fortunately, my son is a terrific dancer who doesn't dance like that - especially when on a date with a very nice girl. (Cotillion pays off again!!)
As for the commute home - he was very glad that his parents were driving and that he was the passenger.  He was one tired puppy!
Posted by Ladybug Crossing at 10:33 AM

I'm glad to hear that a fun and safe time was had by all.

such a shame we don't have Proms here in the UK. I can't help feeling I missed out somewhere.....