Spring is almost here.
Petite Minou is out and about looking for something to chase... 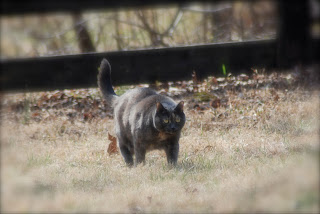 Zeb is enjoying the sunshine and warmer weather, too.  He loves to nap in the sun. I honestly think he may have been a cat in a past life. 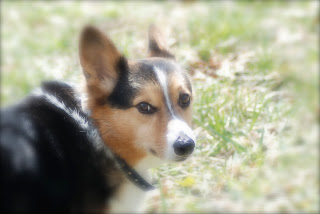 Our days are busy... sometimes busier than we'd like, but it's all good!

#1 was accepted to yet another college - Grove City College in PA.  He is currently 5 for 5 -- we haven't heard from UVA - that's number 6 on the list.  As you know, he has decided on VMI for sure, but still, it's nice to have options.  He is looking forward to the end of the school year, his graduation, and his matriculation to VMI. We have his matriculation date - August 20th. On that date, we'll have a Rat in the family!

People have asked me if I'm ready to see him go. Well, it's like this: It is time. He is definitely ready. How do I know? Well -- #1 and I were chatting the other day about kids who do stupid things. The subject of underage drinking came up and he told me about a conversation he had with another senior.  The kid was talking about drinking at parties and such. He asked my #1 if he had tasted alcohol.  He told this other student that he had indeed tasted it, but that it wasn't his thing. The student asked why. His response was, "Listen, I have way too much to lose. I've got the world at my fingertips. I have a scholarship to college. I have a career just waiting to be had. Why screw it up??  Besides, you don't need to drink alcohol to have a good time." He has his head on straight. I can only hope he keeps it that way...

LLB is currently pouring over the music for Hairspray. The parts are HARD! She described the trumpet part like this: Take a flute part - the kind with a gazillion notes above the staff - hand it to the trumpets and tell them to play it.  She calls it, "Screamin' Trumpets".  Yup - it's that hard!  LLB is looking forward to summer - swimming and relaxing by the pool, spending time with friends, and going to camps.

Speaking of the pool, it's coming along - although it doesn't appear to be much more than a hole in the ground right now. We are looking forward to cookouts, pool parties, and refreshing dips after chopping wood and mowing the lawn!

Mr. won the HOA Chili Cook-off this year! He entered his award winning chili - against 9 other entries - and came away with the trophy for his efforts!  He gets to keep the trophy for a year... We'll see if he can up the ante and win again next year!

My molasses/ginger cookies are a hit with one of our neighbors. He is obsessed with them and wants me to make them commercially.  He tried my chocolate chip cookies yesterday and told me that they are better than anything he's ever tasted. (I have to say, they were pretty good!)   He knows someone who has a professional bakery and makes goodies for restaurants and such. He wants to be my agent and introduce me and my cookies to this person. I told him that I'd think about it.  I just may take him up on his offer... Who knows... I may be the next cookie magnate!
Posted by Ladybug Crossing at 1:58 PM

Petite Minou is not looking so petite. ;o) looks more like fat kitteh in that photo. I hope she finds plenty to chase though.

My dog loves to snooze in the sun too...in fact she'll search out the sunny spots in the house for a nap.

Yay on the kids. They have Awesome parents.

I'm looking forward to summer too.