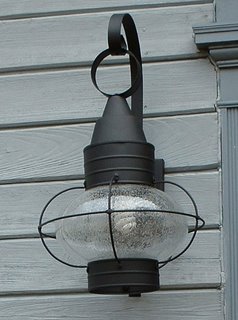 A couple of days ago the new lights for the front of our house arrived. I purchased beautiful onion lights for either side of the front door. You all remember that a while back, the big wind came along and took out my old light. I was oh so heartbroken (not!).

Mr. Bug is not the handiest individual. I know this. I pull him into home improvement projects kicking and screaming. This lighting project was no exception. My dad showed Mr. Bug how to do lighting last time he was here. I have watched my dad replace lighting since I was little. He always said to treat electricity with respect and to never ever touch both wires at the same time. These lessons he imparted to Mr. Bug. I hoped Mr. Bug would remember.

We turned off the power. We got the old junkers off the house. We read the directions. The "box" attached to the house was different than the one in the picture - of course... Is there any home improvement project that follows the directions??

There were changes to be made. Mr. Bug was exceptionally brilliant! He figured out the geometry involved, drilled a couple of holes and presto - we can continue. The only problems he had were with gravity. The screws would fall down and bounce into the garden. (Fortunately, the snakes are still sleeping, the bees haven't returned, and the bugs are still on vacation!) He would bump his little step ladder as he bent over to get the screws and the wire caps would fly off in different directions. The words he was using about the 10th time this sort of thing happened were umm... colorful. I found the whole thing quite entertaining.

We were finally ready to connect the wiring. He must have said 3 "Our Fathers" and about 10 "Hail Marys". He was convinced that electrocution was only a zap away. His fears were unfounded. He survived! He did not get electrocuted. He did not get shocked.

It only took about an hour to get the first light up - from start to finish. We were impressed with Mr. Bug's handiwork.

The second light was much faster. That one took about 15 minutes.

LadyBug
Posted by Ladybug Crossing at 8:19 AM

Woo hoo! I'm so glad Mr. Bug escaped harm and managed to get the lights up - they're gorgeous. enjoy!

awww.. your like little fireflies lighting each other up! Pretty lights! Good choice...

Man, do you rent this guy out?

I like the picture of the light! Kudos to Mr. Bug for staring electrocution in the eye and coming out of it all A-OK! :)

Great, I'm glad the story has a happy ending. You can teach an old bug new tricks! Ha.

it's always good when you survive to see your handiwork! ;-)