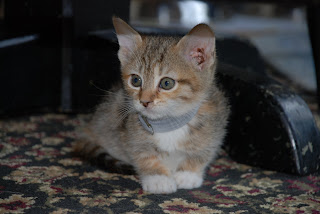 Our itty bitty mini kitty finally has a name...

Thanks for all of your suggestions. It was a hard choice! Mr. liked Chessie because she looks like the kitten on the Chessie railroad cars. #1 has been calling her Mini Kitty.

LLB has named her Poppy.

Why? Because she is Zebbie's lollipop and because she keeps popping up in places we don't expect her to be! Oh, and she has a lot of red in her. And, it just suits her.

Poppy went to the vet this week. The good Doc told Mr. that Poppy is too small and needs to get bigger fast. Mr. has taken this as his personal missioin -- he can't help it -- it's those Italian genes of his. At one point Poppy ate so much that she had a BELLY!! She had a big ol' kibble belly hangin' out there! His mission is working... she's getting bigger every day!!

I'm sorry I haven't been around this week, but LLB has been very under the weather and I have been driving to the Jazz camp (one hour each way every day...) LLB is still not herself, but I am hoping she's on the mend. She finally ate a whole meal at dinner tonight! LLB is my child who eats more than anyone and she hasn't been eating. THIS is distressing! Oh and whatever she does manage to swallow, reappears in very little time. We are currently getting ready to do a "stool study". I wish it were the 3 legged kind instead of the stinky kind...

Jazz camp finished up today and we definitely won't be doing that again. #1 learned a ton and got a whole lot out of it, but LLB was turned off the first day when the teacher told them that their rock/pop music -- including Kenny G -- was stupid and had no value. (#1 was not impressed by the teacher's tirade on music, but at least he sucked it up and dealt!) The fact that LLB has been sick most of the time doesn't help, either, but really... to tell the kids that their music stinks and has no redeeming value is not the way to get them interested in Jazz.

LLB was disgusted and horrified! She likes opera, pop, rock and even rap! She likes techno. She likes musicals. She even likes new age machine music!! But to be told that those musical genres are useless really didn't sit with her. FYI: LLB is very much like my sister, Nicole, in that if what you say makes sense, she'll listen. She might not agree with you, but she will value your opinion. Fortunately, LLB has way too much class to call this teacher on his small mindedness.

Well, #1 is getting ready to head out to Marching Band Camp. We have all the necessities -- the camelback water system, the extra towels, the clothes, and the oh so important peanut butter chocolate chip granola bars. He is excited and a little bit nervous... I am sure he will have a ball!!!

Now, what are LLB and I going to do? She has plans for me: She wants me to take down the oh so ugly wallpaper and paint her room. She's pretty funny!!
Posted by Ladybug Crossing at 6:14 PM

Yeah, anybody who expects you to paint her room has got to be extra funny.....

I think that is a PERFECT name! She is such a cutie. Give her a little squeeze for me.

What a sweet name!!

I hope your LLB is feeling better. And wow, I'd have been perturbed at the music comment. There's value in all types of music...and to be well-rounded...well, I think that's most important.