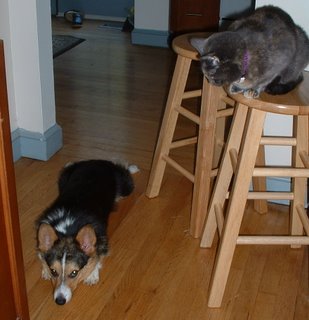 Will they ever be friends??
Zebbie loves Angel. Angel does NOT love, like, enjoy, care for, or even want to breathe the same air as Zebbie. What is a dog to do? He will MAKE her like him. He follows her everywhere. He tries to kiss her. Her feelings on that? Not suitable for print.

Marmalade had another adventure. He asked me to tell you about it today.

You all remember that Marmalade has no teeth and no claws, right? Okay. We can move forward. We have these huge wasps that look and sound like B-52s. They live in the ground and these are their holes. 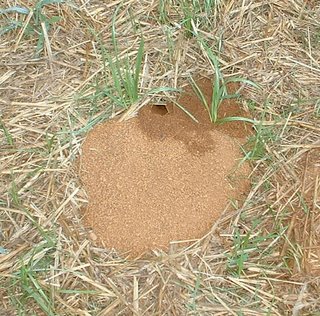 This picture is fuzzy, but you can see the wasp at the edge of the hole. He was doing his morning chores - sweeping and dusting the front walk.. you know... 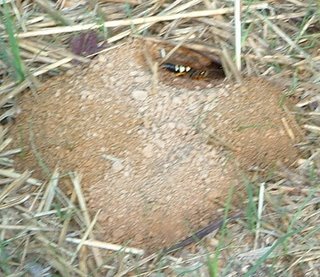 The wasps catch the cicaedas and ride them into their holes. The wasps use the cicaedas to feed their larvae. Anyway, it takes a lot of cicaedas to satisfy these wasps. Our back 40 is loaded with these holes. The wasps arrive in August and will be gone by September. (Their visits are short and effective, so we put up with them. Not that we have any choice in the matter...)

Marmalade enjoys catching and eating the wasps. He sits and watches the holes for hours on end just waiting for the perfect wasp to come along. He winds up his back feet as he gets ready to pounce on the wasp. Then he scoops it up, and tries to cram it into his mouth all in one fell swoop. The whole thing is pretty scary to watch! (Supposedly, the wasp doesn't sting. I'm not getting close enough to find out, thankyouverymuch!)

The other day, we watched Marmalade catch 3 wasps and actually eat one. We think it may have gone down whole because within 5 min. he was caughing it up. I bet it was buzzing around in his tummy. Marmalade had a hummy tummy! LOL!!

We don't actually like the thought of our cat eating bugs and other things that go crunch, but Marmalade has never looked healthier. This past spring we thought he may have been on his way out. He looked terrible. His fur was matted and gross. He had no spark. We gave him some canned food and that helped a little bit. He begged to go outside. We caved and let him out. Since he has been out hunting, he looks better than he has in years! His coat is beautiful - his whites are white and his colors are bright. There's something to be said for the extra protein in his diet... 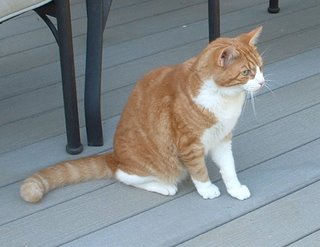 Posted by Ladybug Crossing at 8:01 AM

Insects are pure protein....Finally got to see the infamous Mr. Marmalade! I still think you need to write some children's stories about him. I happen to know a children's libririan that would be interested.

He EATS the wasps????? I'm with Lazy Daisy. I would be interested in the stories. ;)

What pretty kitties and Zebbie is handsome too. That's funny that Angel won't have anything to do with him.

Your dog looks adorable and your cats, too. Marmalade likes wasps, huh? I thought it was the other way around...happy WW!

Poor doggy. Catty doesn't want to be friends.
Mine is up too.

In that first picture your cat looks very ready to pounce on the dog. Too cute!!

My ww is also up.

Poor doggie! I don't think you can change a cat's mind, though!

Oh my goodness! Please DO be careful of those wasps -- I don't know if they ARE the same ones we have - but they LOOK the same (though your pic IS blurry) but our neighbor almost lost his LIFE to a round of stings from ours! He ran over one of their nests with his lawnmower and they had their way with him! OURS sting!

Also - we found out the hard way that SOME kitties really do NEED to be outdoor kitties. As a matter of fact, 2 out of our 4 were not going to be happy OR healthy living entirely in the house! And they both chose to prove it with bad toilet habits! I've always been pretty adamant about my kitties staying IN the house and OUT of harms way... but when Freedom suddenly decided that bathtubs were preferable to perfectly clean litter boxes we gave in and let her out! And when Squash started peeing in our duct registers we let him out too! BOTH kitties had been trying to wiggle their way out for months, both kitties started losing hair in "patches", and both Squash had develped nervous 'tics'... which all cleared up after they were allowed outside. Now, I will tell this -- both of these kitties were "rescued" kitties - and both had known an outdoor life BEFORE coming to live with us -- but we got Freedom when she was only 6 weeks old -- and Squash was probably about 4 months. They both lived HAPPILY in the house - Freedom for almost a year - and Squash for about 6 months - before they demanded to go out! But once they made up their minds - let me tell ya - they were POSITIVE about what they wanted! LOL!

*grin* He sure does look great! Wasps that don't still.. strange. And they stay a month? Even stranger! :)

and for Zebbie "try to gradually make friends with the cat, not too fast."