Sunday was my day to meet fellow blogger, Renee. Gram and I had planned to go to lunch to meet Renee and then do a little shopping in the afternoon since the rest of the family was supposed to be off skiing. Alas, the roads turned messy so they turned around and came home. LLB decided to join us rather than stay home with the boys and watch football.

Since I had met Daisy, FlipFlop, and Melli I wasn't nervous. Besides, it's like you know these people - you read about their lives every day. Renee was exactly what I expected! She is sweet nice, and just a terrific person. We chatted for hours but the time FLEW by!

Mr. and the kids headed out to Keystone on Monday afternoon. They had to wait for Nicole's new fridge to be delivered before they could leave. LLB learned that skiing in Colorado is far different than skiing in Virginia. Their green trails are like our blue. The mountains are bigger in Colorado and therefore the runs are much longer. She did her 1.5 hour run and had enough. Auntie Nicole welcomed her with open arms and a hot cocoa. Mr. headed back out to ski his butt off and had a marvelous time! His fastest time was 6 min. from top to bottom and that was in a full tuck with skis pointed straight down. That is not something you would ever catch me doing. I am a cautious skier. #1 has had more experience on skis than LLB, so he was out there shooshing and meeting people and just having a wonderful time. He got about 4 or 5 long runs in before he got cold and tired and went to find Auntie Nicole and Uncle John.

Tuesday we hit the Denver Mint. It was really fun! You have to arrive at a specific time with your reservation sheet in your hand. Getting in was almost as bad as TSA. You have to leave all bags, wallets, cameras, etc. in your car. You have to take all metal off and go through the metal detector. While we waited for our tour to start we saw coins from biblical times, coins from the early days of the US, and more. It was absolutely fascinating!

The tour was exactly 30 min. Our tour guide was a cute college student who was home on break. He was very knowledgeable and when we asked him about the security on the employee's end, he told us that it was very simple - No coins in. No coins out. It made sense.

After the mint, we went back to Nicole's for a quick lunch.
Then we went to the Science Museum. Mr. decided to do the planetarium show because he doesn't do Imax with the motion. The rest of us headed off to the Imax dinosaur show. LOL! His planetarium show turned out to be an Imax! He got to fly through a black hole!

We saw dinosaurs - it seems I cut the line to get into the dino exhibit. But, I never saw a line and I just walked in - followed another family. The rest of the family followed me in - after they got stopped by the lady in the hallway. (The lady who looked like she was just directing another family when I walked by.) The dino exhibit was cool. 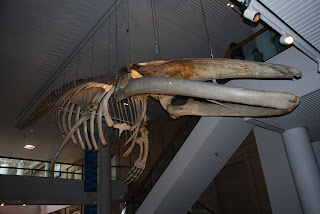 This dino is outside the Imax theater. You can't take pictures in the dino exhibit...
From there we saw all kinds of exhibits, but my favorite was the sign behind the bathroom door. 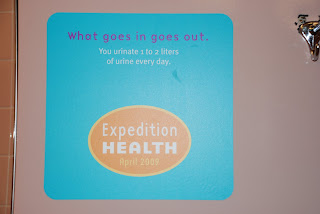 The views in Denver are simply stunning and the photos I took just don't do it justice. 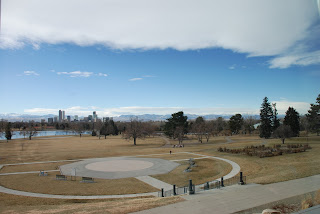 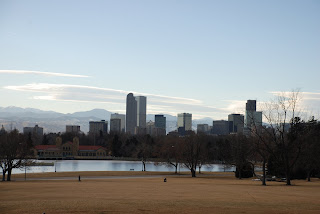 Our adventures in Denver were fun. Mr. doesn't travel well and he was starting to channel his father again, so it really was time to come home.

Speaking of home, we still had to get there. The flight out of Denver was on time and schedule. No - I skipped the turkey sandwich on that flight. I actually had an apple walnut salad from McDo in the Denver airport.

On the way home we flew through Atlanta. Have I mentioned that the Atlanta airport is HUGE?! We had 2 hours between flights. We located the gate and went there. It was as far out as you could get... Gate E37. After we walked a mile to get some lunch, I decided that the gate was just a little too empty. I went and asked a Delta person if this was indeed our gate. I was informed that D17 was our new departure gate. We finished up our lunches and headed out. On the way, I saw an information desk and asked again. It turns out our gate was moved to B15. Have I mentioned that the airport is huge? They connect the terminals with a subway train.

When we reached B15, I went to the lady at the desk and asked if this was our gate for real. Yes... it was, "but they might change it again, so pay attention". Mr. was behind us since he had to pack his computer up, so I called him with the news of the change. He arrived within a few minutes. Once we boarded the plane, we were told that we were going to have to wait because of high winds here at home. 2 hours late, we took off. The plane we booked the flight on was a 757 - but we booked in April. The plane we were on had 19 rows... It was small... smaller than I would have like to be flying into 40mph winds. But, I know that the pilot wants to be home for dinner, too... so...

We landed with the smoothest landing of the 4 flights. Our luggage was all here. The wind - it was whipping as we waited for the shuttle to take us to our car. We were all pretty cranky, but at least we were home.

The story doesn't exactly end there...
But you will have to wait until tomorrow for the conclusion.
Posted by Ladybug Crossing at 9:50 AM