The Devil is Up For Grabs 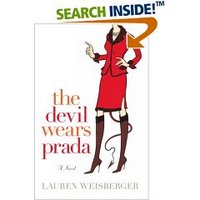 The Devil Wears Prada is once again ready to circulate. You remember that it went from Hawaii, to Renee, to me. I finished it and Wow! - what a great book. If you want it, let me know in comments and I'll have LLB pick from a hat on Monday afternoon. It will ship out on Tuesday.

It's a fast and funny read! Don't miss it, people!

I wasn't supposed to, but I went shopping yesterday. Yes, I braved the crowds and came out relatively intact.

I found some real bargains at Bath & Body Works - I even used a coupon. Did you know that they discontinued the Wall Flowers Juniper Breeze? Well, now you do. Did you know that you get a coupon for every purchase? I happen to have 2 burning a hole in my pocket. I think I need to go back next week to spend 'em....

We hit Walmart. The crowds weren't too bad. I got a few things there and got out fast. I actually picked up a video game for one of the kids while I was there. I saw an employee and asked if he had the game. He got it, brought me to the register, and I was checked out in approximately 2 min. LOVE THAT!

Kohls... Hmm... Well - it was CROWDED! You definitely need two people and cell phones to shop in a timely manner. Mr. Bug went to the mens' room and discovered that you can check out at customer service. The lines for the regular registers were snaking throughout the store... He called me to inform me of this priceless little detail and then promptly got in line while I continued to shop. He called me again when he was 2 people from the register. I could have shopped a little longer, but... Since I only went in for a couple of things, it was okay. I picked up a real bargain - a white button down shirt for LLB's band concert on Wed. for $8. We were out of there in record time!

I even convinced Mr. Bug to hit AC Moore with me. We shuffled through there and picked up the kids' Gingerbread House that they make every year for $6. Then I found a pine garland for $3. I'll use that for the advent wreath at church. I know "they" want real pine garland, but let's think about this... The real stuff is extremely flammable, it dries in a NY min., and it sheds mercilessly. The fake can be used year after year and has no issues. If "they" don't like my garland, "they" can do it themselves, right?

So, we left the house shortly after 10am and were back chowing down on leftovers by 2:15. I'd say we had a successful shopping excursion.

I was going to set up our tree yesterday, but I had to finish a birthday gift for one of LLB's friends. The party is today... I could not procrastinate any longer. Needless to say, the gift is done along with another project I had going. The tree will go up today. I'll post a picture once it has been properly primped.
Posted by Ladybug Crossing at 8:45 AM

I'm not putting my name in the hat - 'cos the UK is just too far to send it.....but I'm tempted to put it on my wishlist for Christmas!

What fun times. I don't do the "day after" shopping thing, tried it once and vowed to never do it again!
Sounds like you put a dent in your Christmas shopping though.

I am halfway, it's great and fun reading. By the way: what is wrong with Kailani?? can't reach her site, did she move?
Show that tree!!!!

Ack, you are way too organized LadyBug! The tree is up, but no ornaments are on it. I'm trying something new this year - all silvery white ornaments and ribbons. I thought it might be a little easier than unwrapping the gazillion ornaments I've collected over the years - we'll see!

You can stick my name in that hat. I haven't read that yet and haven't seen the movie either. Sounds like a light and fun read for during the holidays when you're stressed out to the max!

I'm jealous of your holiday shopping. And, I WILL be hitting B&BW tomorrow now! HA!