8th Grade Band Student...
For the 3rd year in a row the recipient was LLB.
Just like her brother.
FYI: Only two students have ever gotten Most Outstanding Band Student for 3 years in a row - both of them live in my house. :-)

LLB works very hard.
She got a plaque with her name on it. How cool is that?

LLB also walked away with 3 superlative awards chosen by her classmates: Biggest Workaholic, Most Talented, and Most Dedicated. She was so excited!

The 8th grade gave their band teacher a very special gift - a new Mollard baton with his name engraved on it. He was touched. It is definitely not something he'd ever purchase for himself. LLB presented it to him. She did a great job of it. After he opened the baton, she asked him for the old one. He gave it to her and she promptly passed it to HP. HP eventually gave it to the boy who won "Most Likely to Become a Band Teacher".

BUT, the best gift he got came from all of the students - a cart filled with root beer and birch beer - his favorite beverages. He was SOO excited - his eyes actually lit up! 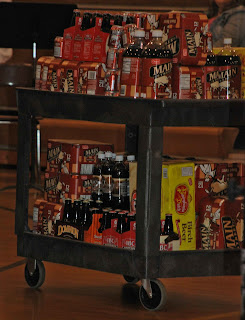 Posted by Ladybug Crossing at 6:47 AM