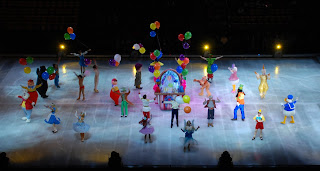 We went to see Disney on Ice last week - a big thanks to Mom Central and Feld Entertainment. It was a terrific evening out.

We arrived and found our seats - they were pretty high up, but we could see everything just fine.  It was not until the next day that we realized that we'd gone 5 rows too far, but it all worked out. We were virtually alone up there - no one was coughing or sneezing behind us. We're not totally germ-phobic, but right now, we're all so busy that none of us can afford to get sick. 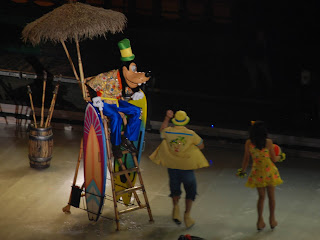 There were two young mothers and their children in front of us. Their kids were little - about 3 or 4 years old. They were well behaved and were enjoying the show. As soon as Ariel came out, one of the mothers got all excited, said very loudly, "Oh, it's Ariel!!", and started dancing in her seat. Those two little kids gave her a look and then promptly pretended that they didn't know her. It was hysterical! Isn't it usually the other way around?  I wish I could have gotten a picture of the whole thing, but I was too busy laughing! 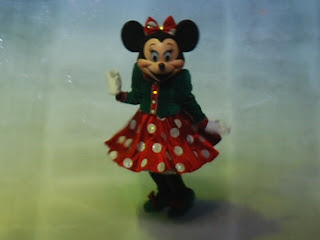 There was enough Mickey and Minnie to keep the younger set entertained.
The skating was terrific - we still don't know how they skate with those costumes on!  Speaking of costumes - they were amazing! Check out this Troll Doll from Toy Story: 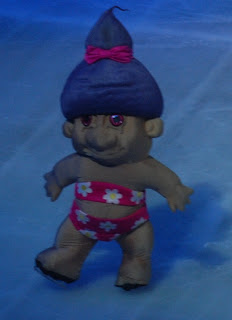 The skaters must have done 5 or 6 costume changes... They even had skate covers for the skates that made their feet look like they had shoes or sandals on. See? Look at the shoes:

We are still in awe over the costumes... They were that gorgeous!